Rabia Chaudry is an attorney, advocate, podcaster, and author of the New York Times bestseller Adnan's Story: The Search for Truth and Justice After “Serial”  and executive producer of a four-part HBO documentary The Case Against Adnan Syed, which was based on her book.

A 2021 Aspen Institute/ADL Civil Society Fellow and a 2016 Aspen Ideas Scholar, she serves on the Vanguard Board at the Aspen Institute. She is a Fellow of the Truman National Security Project, a Fellow of the American Muslim Civic Leadership Institute, and a Fellow of the Shalom Hartman Institute. Currently, she is a founding board member of the Inter-Jewish Muslim Alliance and the Muslim Jewish Advisory Council, both of which focus on building Muslim-Jewish coalitions around pressing policy issues and educating across communities to break barriers.

Her new book, Fatty Fatty Boom Boom: A Memoir of Food, Fat & Family, is “a warm, intimate memoir about food, body image, and growing up in a loving but sometimes oppressively concerned Pakistani immigrant family.”​​​

Wanda M. Morris is the award-winning author of All Her Little Secrets, which was named one of the “Best Books for 2021” by Hudson Booksellers and selected as the #1 Top Pick for “Library Reads” by librarians across the country.

As a corporate attorney, Wanda M. Morris previously served as President of the Georgia Chapter of the Association of Corporate Counsel and is the founder of its Women’s Initiative, an empowerment program for female in-house lawyers. She is an alumna of the Yale Writers Workshop and Robert McKee’s Story Seminar. Wanda is a member of Sisters in Crime, Mystery Writers of America, Crime Writers of Color, and serves on the Board of International Thriller Writers.

Her newest book, Anywhere You Run, has been called “wise, riveting, and full of surprises” that “will keep you up past your bedtime and stay with you long after the book is closed.” It has been said that its “finely sculpted characters and crisp dialogue help make this a standout” and it has been named one of “Fifteen Standout Historical Fiction Books to Read this Year” by Oprah Daily.​​ 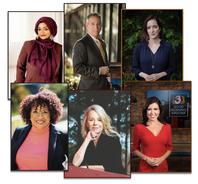 Larry has been featured on several national and international media outlets, including the Smithsonian Channel, C-Span, and the Today Show. His books have been translated into numerous languages and can be found throughout the world. Larry is an attorney, having received his B.A. and J.D. from the University of Florida, where he served on the Law Review.

Larry’s newest book,The Watchmaker’s Daughter: The True Story of World War II Heroine Corrie ten Boom, has been called “Reminiscent of Shindler’s List and featuring a journey of faith and forgiveness not unlike Unbroken;” it “is destined to become a classic work of World War II nonfiction.”​​​

I Have Some Questions for You

Olivia Fierro is a professional broadcast journalist whose impressive communications skills allow her to effectively connect with an audience through all media landscapes: television, podcasting, social media, and as a host/speaker/moderator for in-person events.

Olivia anchors 20 hours per week of live television as co-host of Good Morning Arizona, which includes interviews with newsmakers, lifestyle segments, and breaking news (for which she earned a Regional EMMY Award in 2021).

Beyond the news desk, Olivia is the founder and host of Olivia’s Book Club, an online book community, and is the host and producer of a weekly podcast of the same name. She also lends her time, voice, and creativity to a variety of organizations and causes (Valley of the Sun United Way, Dress for Success, Chicanos Por la Causa, March of Dimes AZ, GOTR, HonorHealth Foundation, among others) helping these non-profits raise hundreds of thousands of dollars.

Olivia Fierro is a graduate of University of California, Los Angeles, and earned Bachelor of Arts degrees in both History and Women’s Studies.​​​

Dani Shapiro is a bestselling author of five novels, including Family History and Black and White and five memoirs, including Hourglass and Inheritance. She is also a screenwriter, who is currently working on an adaption of Sue Miller’s 2020 novel, Monogamy, to star Holly Hunter,  and is the creator and host of the popular iHeart Radio podcast Family Secrets (now in its seventh season).

Her work has been featured in the New York Times, The New  Yorker, Vogue and Time. She has taught at Columbia,  Wesleyan, and New York University and is the co-founder of the Sirenland Writers Conference in Positano, Italy.

Her previous book, the memoir Inheritance, won the National Jewish Book Award and has been optioned for TV by Killer Films (Boys Don’t Cry, Still Alice, Carol). Her new book, Signal Fires  — her first novel in 15 years — is a “riveting, emotional, impossible -to-put-down, literary and commercial tour de force, and a work of haunting beauty by a masterly storyteller at the height of her powers.”​​

Rebecca Makkai is the Chicago-based author of the novels The Great Believers, The Hundred-Year House, and The Borrower, as well as the short story collection Music for Wartime. Her work has been translated into 20 languages, and her short fiction has been anthologized in The Pushcart Prize XLI (2017), The Best American Short Stories (2008-2011), The Best American Nonrequired Reading (2009, 2016), and featured on Public Radio International’s Selected Shorts and This American Life.

Her last novel, The Great Believers, was a finalist for the Pulitzer Prize and the National Book Award, and received the ALA Carnegie Medal and the LA Times Book Prize, among other honors. One of the New York Times Ten Best Books of 2018, it has been optioned for TV by Amy Poehler’s production company. A 2022 Guggenheim fellow, Makkai is on the MFA faculties of Sierra Nevada College and Northwestern University. She is also Artistic Director of StoryStudio Chicago.

Her new novel, I have Some Questions  for You, is both “a transfixing mystery and deeply felt examination of one woman’s reckoning with her past.” It is considered to be “the greatest achievement yet by one of America’s most acclaimed authors.”​​​